The Case for Airborne Transmission of COVID-19

What do all of these terms mean when it comes to the spread of COVID-19?

Let’s look at definitions of each first.

Droplets – Defined by the CDC and the WHO as projectiles that infect by impaction and fall quickly to the ground (often called  “ballistic droplets”). Particles larger than ~300 μm have enough inertia to reach someone else 18 inches and 3 feet when talking, which is most relevant for SARS-CoV-2 where much transmission occurs for people with little or no symptoms who don’t cough. These are the only possible ballistic droplets.

Fomites – Inanimate objects whose surfaces can become contaminated when touched by the carrier of an infection and can then transmit the pathogens to those who next touch the surfaces: Doorknobs are often cited as the classic fomites.

Aerosols – Defined by the CDC and the WHO as particles that remain in the air for minutes to hours and infect by inhalation. Particles smaller than ~ 100 μm do not settle very quickly to the ground, do not have enough inertia to reach others as ballistic droplets, and can be inhaled. These can only be defined as aerosols.

Airborne – Defined as the spread of an infectious agent caused by the dissemination of nuclei that remain infectious when suspended in air over long distances and time.

A virologist will tell you that plenty of other “droplet”-borne pathogens, like influenza, can be transmitted by inhalation. The size and behavior of the particles that are inhaled are not always the same, but anyone that studies viruses will have the same general questions. How much infectious virus is in those particles? Where do the particles go in the respiratory tract? What is the receptor distribution like in the respiratory tract? What circumstances allow the virus to find a susceptible host cell? There is not enough scientific data to answer these questions regarding COVID-19, but despite that, there isn’t actually much of a debate across disciplines over whether short-range aerosol transmission occurs.

While it is still hard to find epidemiological data that shows transmission through the air over a short range,  personal accounts and contact tracing have indicated that people are being infected by short-range aerosols or droplets. High profile outbreaks, from cruise ships to restaurants, to camps and choir practice, share telltale signs that airborne transmission is happening.

We do know that the SARS-CoV-2 virus is transported in particles emitted by an infected person. The virus cannot existed as a viable single particle with a diameter of 0.1 to 0.125 microns, it needs a carrier – usually other droplets that are typically 1.0 micron or larger. When we talk, shout, sing, cough, sneeze or simply breathe, we exhale small particles (“aerosols”) that are made of saliva or respiratory fluid (the liquid that wets the inside of your trachea, lungs etc.). These aerosols are the “carriers” of SARS-CoV-2 viruses, and can infect when they are inhaled. These aerosols can quickly decrease to approximately 40% of their original diameter, or smaller, due to evaporation.

Since they consist of both water and organic matter, potentially including the SARS-CoV-2 virus, they will never totally evaporate.

While many scientists think that the aerosol pathway is at least as important as droplets and fomites when it comes to the spread of COVID-19, the CDC states that ballistic droplets are dominant, fomites are possible but minor, and aerosols are minor. The WHO states that ballistic droplets and fomites are dominant, and aerosols are possible but minor.

The likelihood of spreading is increased by exposure time, crowding, low ventilation, no masks, and talking.

Just four months ago when I was preparing for my Healthy Buildings webinar, I could find very few resources on aerosol transmission. At the time, I recognized that we needed to pay attention to aerosols and how airflow in enclosed spaces played a role in transmission of the virus. Now, there are several studies and real-world examples of the virus spreading by these small particles. In these examples, a very clear pattern has emerged. Indoor environments are needed for superspreading events. The likelihood of spreading is increased by exposure time, crowding, low ventilation, no masks, and talking (especially singing / yelling). Several outbreaks have occurred in choirs / bars / meat packing with high attack rates, but none have been reported in places such as movie theaters where there is almost no talking and better ventilation (aren’t you always cold in the movies?).

On the day that I am writing this, Dr. Anthony Fauci, the head of the U.S. National Institute of Allergy and Infectious Diseases acknowledged the role of aerosols as well. “There was some real misunderstanding about respiratory droplets and so-called aerosolized particles,” he said. “The aerosol and particle physicists that have approached us now have told us that we really have gotten it wrong over many, many years. Bottom line is, this is much more aerosol than we thought.”

Airborne spread of SARS-CoV-2 seems likely to have contributed to the high attack rate recently in a bus in China. The study stated that “future efforts at prevention and control must consider the potential for airborne spread of the virus”.

Despite much evidence pointing to aerosols as a culprit in this pandemic, the CDC‘s main message continues to be to stay apart 6ft. But we now know that in poorly ventilated spaces, there is no safe distance. Virus-laden aerosols produced in speech (<10 microns) can remain viable for hours, travel much further than 6 ft, and build up in crowded poorly ventilated rooms. While these aerosols are floating in the air, if another person inhales them, they can become infected and then later infect others.

Part of the problem is that virus-containing respiratory aerosols are not visible, so people do not understand how to contain and control them. I was recently in the parking lot of a grocery store and walked past someone smoking a cigarette. Despite wearing a mask, I could still smell the exhaled smoke. This is a form of aerosol, just much more dense. Think about being in a room where someone is smoking. The closer you are to the smoker, the stronger the smell – and the more smoke you’re inhaling. In a poorly ventilated room, that cigarette smoke lingers in the air. Over time, the smoke will fill the room.

Imagining how cigarette smoke moves around, both indoors and outdoors, can help in understanding how virus-laden droplets circulate in the air. If we behave the way that we would if everyone around us was smoking, it will help reduce your chance of infection. 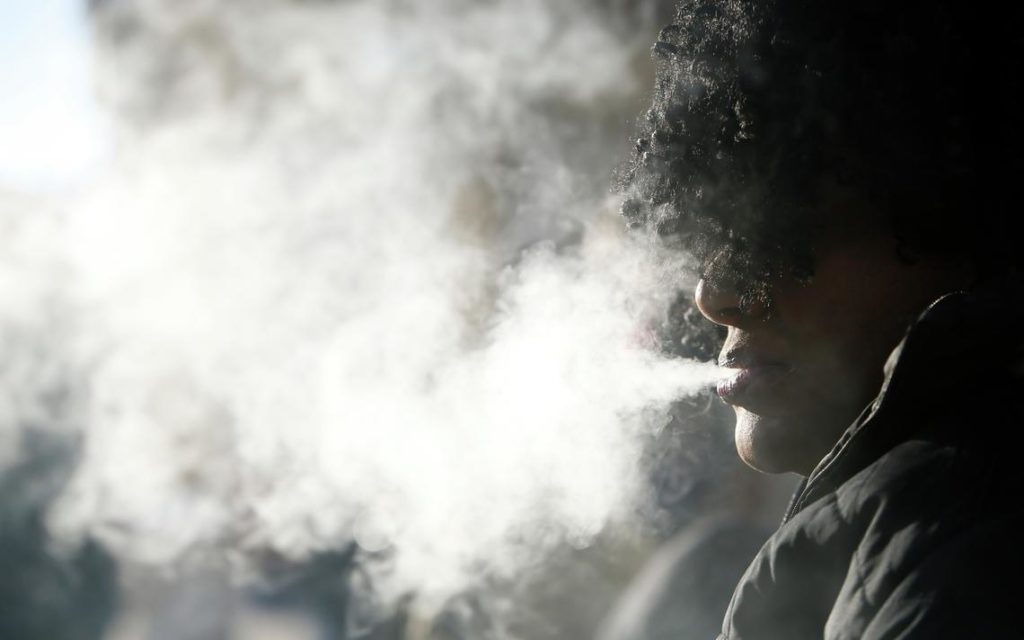 It is important to note that even though non-N95 masks might not control incoming aerosols, they can stop outgoing particles from becoming aerosolized. So masks are still good for source control when in a space with more than one person and poor ventilation.  Some cases of long-range transmission of COVID-19 are being documented, but they appear to involve fecal aerosols transmitted through the sewer lines of high-rise buildings in Hong Kong and China, and not transmission between different rooms in the same building that share an HVAC system.

You should try to avoid or reduce as much as possible situations that facilitate inhaling the “smoke” (exhaled air) from others. To reduce risk, avoid:

Each one of these features potentially increases the aerosol concentration you might inhale indoors.

The virus is not going away anytime soon and we need to find a safe way to get people back in buildings and children back in schools. Healthy building strategies like increased ventilation and filtration must be added to more widely accepted control measures such mask wearing, hand-washing, and distancing.

Most HVAC systems can reduce aerosol concentrations via two methods, increased ventilation (outdoor air) and filtration.  Some mechanical systems are designed to bring in a minimum amount of outdoor air based on building codes and design standards. The ability to increase the flow of outdoor air above these minimum values is usually limited by the ability to control temperature and humidity and the duct system used to distribute the air.  For aerosol removal, filtration (rated above MERV 13) can supplement outdoor air ventilation.

Opening windows is another method that can be used to increase ventilation. Installing fans to move more air  is preferred to ensure a more constant and continuous ventilation rate and can assist with moving aerosols out of the breathing zone where they will linger in a stagnant environment.

Each day we learn more about how this virus get transmitted. As a result, the link between clean air and preventing the spread of the COVID-19 is also getting more attention. Along with ventilation and airflow control, we know that certain technologies, such as bipolar ionization, UV lights, dynamic filters and humidity control improve air quality indoors and can be an effective way to destroy viruses. My suggestion is to find trusted sources that are experts in the fields of infectious disease and HVAC design and follow their recommendations to help contain the spread of the virus through all means available.

If you’ve ever wondered what Luke Powell does to maintain his extreme level of fitness,  read the latest issue of the Jewish Community Center’s newsletter.